A graphic summarising and introducing #oecsk2019

The three #oecsk2019 blogs summarise a cross-section of presentations and workshops – as I interpreted their content(!). My understanding was challenged at times owing to German being my second language, quirky local dialects and the technical terms used by some presenters. Conference abstracts (in German) can be found here.

The conference theme was pertinent given the location at the Austrian-Italian border. Susanne Hecker (German Centre for Integrative Biodiversity Research and sci comm expert) showed how borders can be both visual and conceptual. There are positives and negatives to consider borders simultaneously lock in, lock out, protect and  alienate. They also shape identity. For the field of cit sci, this means building workable definitions in an increasingly complex field. Arguments have flourished (see Heigl et al. 2019) partly due to the multi-disciplinary nature of the field. However, not defining the field will undermine the credibility of cit sci as a robust and powerful method of research. In the US, cit sci is a legal term, made explicit in the Crowdsourcing and Citizen Science Act (2016). 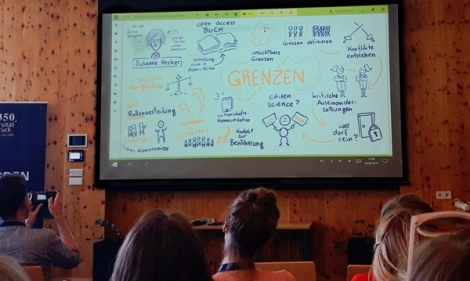 The failure of the deficit model of science communication has only added to the momentum of citizen science. Roles have changed – professional scientists are no longer the only experts – locals and amateurs can also possess great skill and knowledge. University ivory towers are showing cracks. For effective cit sci, researchers need broad skill sets to coordinate, motivate and communicate with study participants. Transparency and openness are integral to cit sci but implementation varies widely in line how these concepts are understood. Markus Weisskopf (Wissenschaft im Dialog gGmbH) described how science plays an increasingly complex role in everyday life adding impetus to the need for a critical analysis of interactions and processes between coordinators and participants and an ongoing evaluation of roles that citizen science can play (see Price & Lee 2013).

In the second of Susanne’s presentations, she underscored participation as a pillar of democracy. Support for citizens to be part of policy decision-making is enshrined e.g., in both the Convention on Biological Diversity and through the Aarhus Convention. To better understand how cit sci is interpreted in policy, she reviewed 43 documents. These were prepared by government agencies and ministries around the globe and the term ‘citizen science’ was used 1130 times. Most documents were enviro-centric covering biodiversity assessments, biosecurity and environmental health risks. A method of data collection (see Bonney, 2009) was the most common interpretation of cit sci cf. a means to democratise science (see Irwin, 2001). Benefits were generally described for members of society rather than for the whole of society. Challenges are summarised as (original PPT slide slightly re-ordered):

‘Managing (participant and coordinator) expectations’ was also included and emerged as an important consideration over the 3-days of presentations. A review of policy document authors/advisors not surprisingly showed a strong influence from the scientific community underscoring their potential roles as cit sci advocates and channels to policy-making.

A poster session followed a dynamic series of short presentations by poster developers.

The benefits of citizen science

Benefits of cit sci for participants as published in peer-reviewed publications are numerous however poorly studied in biodiversity-related projects. PhD candidate Maria Peter (University of Kiel) scanned 388 projects featured in a 2015 study by Theobald et al., and found only 14 papers (10 from the US) covered outcomes for participants. She described how meta analyses of projects are complicated by the different methods used (e.g., questionnaires, interviews and focus groups) and priority/objective of the researcher. Her findings included:

She also found studies on the relationship between project characteristics (e.g., duration, regularity of participation, level of interaction between participant and scientists) and outcomes for participants are lacking. This may indicate a lack of expertise e.g., social scientists to design and implement social research may not participate in biodiversity-focussed projects.

Knowledge gain – and loss – was the subject of a talk given by Wolfgang Ressi (Austrian Board of Trustees for Agricultural Engineering and Land Development). He described how older farmers can be strongly connected to their local and surrounding area, although knowledge loss driven e.g., by socio-cultural and economic factors still occurs. Cit sci in this context is used to reinvigorate farmer and wider community member learning by focusing on key indicator species. Behaviour change is measured through changes to land management to protect indicator species. Josephine Berndt (University of Koblenz-Landau) discussed the learning outcomes of students across different levels of participation in citizen science project, QueichNet. Both pre-and post-tests were used in this Sparkling Science-funded project. Methods were also discussed by Suzanne Kapellari (University of Innsbruck), particularly the challenges of longitudinal studies (it’s hard to think of the best questions from the outset!), and then publishing the findings of interdisciplinary studies.

Irwin, A. 2001. Constructing the scientific citizen: science and democracy in the biosciences. Public Understanding of Science 10(1) 1-18