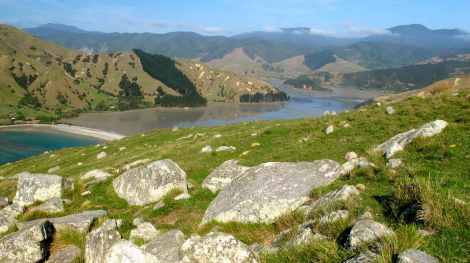 View over Cable Bay and Delaware Bay from the top of the Cable Bay walkway. Photo: https://nzfrenzysouth.wordpress.com

The final working group meeting for Nelson finalises the NZ Landcare Trust’s Citizen Science Meets Environmental Restoration project. This was the last of 12 meetings/workshops that have taken place over the last 3 years across 4 different North and South Is. locations – Nelson, Dunedin, Palmerston North and Auckland. Yr 1 meetings covered barriers and opportunities in citizen science; Yr 2 comprised mainly tours to citizen science project sites with discussions en route, and the final 4 meetings in Yr 3 provided hands on monitoring training for participants. Water quality has proved to be a popular topic given increasing community interest in the state of our freshwaters.

In New Zealand, water quality monitoring is carried out by science professionals and local authorities (the latter obliged to do so under the 1991 Resource Management Act), with data contributing to national State of the Environment Reporting. This contrasts greatly with the US, where water quality monitoring has long been carried out by community members. National programs such as Save our Streams (Izaak Walton League) along with state-wide programs (e.g., Florida Lakewatch, Maine Volunteer Lake Monitoring) have all been underway for over 30 years and engage thousands of volunteers annually.

The NPS-FM will enable local authorities and communities to plan for freshwater objectives (i.e., the desired state of freshwater relative to the current state), through participatory processes. There will be a staged process for implementation (deadline: December 2030). To help design these processes, a collaborative project between science providers, universities and independent researchers seeks to engage Iwi and communities ‘…in all aspects of the planning cycle, including monitoring, evaluating and updating [freshwater] management approaches to improve economic, social, cultural and environmental outcomes for the entire community over time’.

It takes a day to introduce freshwater monitoring and provide participants with some hands-on experiences e.g., to identify invertebrates. Twenty participants representing farming, education and community, rural and urban interests attended the day at Cable Bay Adventure Park, 15 mins east of Nelson. The NZ Landcare Trust delivered the workshop in partnership with the Friends of the Maitai, and with support from the Waimaori Stream Care program. The main objectives were to show how members of the public can measure water quality using simple tools and monitor fish populations. Content-wise the aspects of water quality covered were very similar to previous workshops run by NZLT and partners in Wellington, Dunedin and in the Wairarapa.

New technology is rapidly making water quality monitoring easier and cheaper while producing good quality data. An addition to the toolkit and currently undergoing trials by community groups is an electronic phosphate testing device (Hannah Instruments). The device works by passing a light beam through a sample to analyse colour, with the test comparing two water samples to take a measurement of phosphate. The first sample has a chemical added, with the chemical changing the samples colour with increasing intensity with a higher concentration of phosphate. The device compares this to a second sample without chemical to measure colour change. The test takes less than 5 minutes and its accuracy is being tested in a comparative study in 2018.

The Hanna Instruments Phosphate testing device – a new addition to the SHMAK kit being trialled by community groups in 2018. Photo: Alastair Cole

Research carried out in 2015 with community environmental groups showed that a staggering 41% of community groups (n=239) were interested in monitoring water quality (Peters et al. 2016). Since then, SHMAK, first developed in 2002 by NIWA scientists (with funding from the Ministry for the Environment) has been updated. Version 2 now forms the basis of a citizen science programme led by Dr. Richard Storey. SHMAK users identify macroinvertebrates and measure water clarity, conductivity, pH, temperature and flow using simple tools. Guides for assessing stream and habitat characteristics (e.g., substrate type and riparian condition) are also included. An important feature is that onsite assessments can be made without the need to send samples to a lab.

A feature of these workshops is the range of topics covered. The farmers in the group felt pressured with the public becoming more critical about the impacts of farming on the environment. The farmers highlighted the costs of fencing, planting and securing alternative sources of water for stock and emphasized they are doing the best they can. However, tools such as SHMAK can help build a better understanding of individual farm impacts if measures are taken where waterways enter and exit the farm. There may also be opportunities to involve schools in on farm water quality monitoring.

Making the best use of community resources

The new SHMAK costs $1000 – a considerable investment for landowners, schools and community groups. A discussion grew around where best to place kits in the community to enable the best access, maintenance and management. Similar discussions centre on predator traps and how best to establish ‘libraries’ and systems where items can be tracked (e.g., setting up bonds, time frames for use, reminders to borrowers). For SHMAK, options tabled were schools, with one kit serving a cluster of schools or with local authorities or community groups.