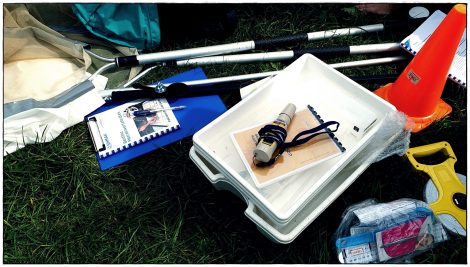 Some basic tools of the trade for freshwater quality monitoring

Early in the planning stages of the event of the #CitSciNZ2019 Symposium on April 9, it was clear that a practical, hands-on element was needed to counterbalance the day of presentations and networking at Te Papa. A series of workshops quickly materialised covering tools and techniques to monitor either changes ecosystem condition or species (e.g., birds, lizards). Workshops like these enable community group members to learn new skills from experts and other participants while also strengthening their personal networks.

Staff from several government ministries joined the workshops. Although they learned new monitoring tools and techniques, they also remarked that spending time with community groups provided them with new insights into the rewards and challenges of coordinating/participating in community environmental restoration initiatives. Seeing the environment through a practitioner’s lens, can differ markedly from that of a funder!

Trent Bell, Asha Fernandez and staff from Ecogecko provided a technical talk on lizards at Te Papa, starting with the basics (what is the difference between and gecko and skink?), then introducing lizard ecology and basic survey/monitoring methods. They highlighted that lizards are our ‘forgotten fauna’, their camouflage, silence and diminutive size often rendering them invisible to most people. Owing to mammalian predators and habitat destruction, nearly all lizard species are threatened, exist in low numbers, have fragmented populations or are found on predator free islands. Field trips to Matiu/Somes Island and Zealandia covered the practicalities of field monitoring and safe handling for making body measurements/observations. 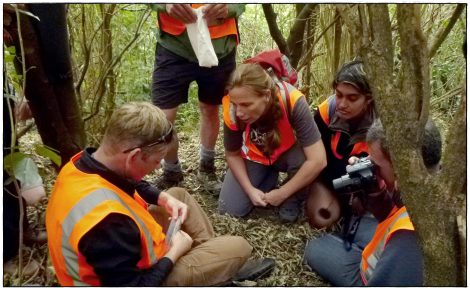 The Department of conservation runs the Amphibian and Reptile Distribution Scheme (ARDS), an internal database where members of the public can submit their sightings. Owing to sensitivity over location (poaching is a significant threat to our unique herpetofauna), that data cannot be publicly accessed. For more useful information, connect the Herpetological Society of NZ.

Peter Handford (Groundtruth) and Ngaire Tyson (Kiwi Coast) ran workshops on using the online Trap.NZ predator trap catch data management system, as well as bird identification and monitoring (including the commonly used 5-minute Bird Counts). Projects lodged on the former has doubled over the last year, with over 800 projects currently listed. Trap.NZ will help mark progress toward Predator Free 2050. Monitoring birds remains one of the most popular methods of measuring the success of predator control operations (although there is growing interest in lizards as indicator species). Both workshops took place at the Leonard Cockayne Centre at Otari-Wilton Bush, a 100ha native plant sanctuary and forest reserve.

Trailling how to do 5-minute Bird Counts with Peter Handford

David Bergin (Trees that Count, Project Crimson, Coastal Restoration Trust of NZ) led a group to a newly revegetated site in an urban park (Vice Regal Park, Newtown). There, participants learned the rapid plot survival method, developed to verify the overall success of plantings registered with Trees That Count (over 12 million trees have been planted since 2016!). There is a Basic method (< 1000 trees), a walkthrough to estimate of survival by species and an Advanced method (> 1000 trees), comprising small bounded plots or belt transects.

Next steps for TTC is an easy to use data management system for community groups, landowners, schools, iwi, councils etc. However, David stressed that the biggest hurdle is getting a reasonable proportion of restoration programmes monitored at all before considering how the data will be managed.

Tim Park (Wellington City Council) and Leon Perrie (Te Papa) ran a mini-bioblitz of ‘Bush City’ at Te Papa. This remarkable ‘living exhibition’ of plants and geology was developed 20y ago and planted by Tim’s father, Environmental Historian Geoff Park. The aim was to record every species in the area including plants, insects, birds and fungi using Naturewatch NZ as the data capture tool. A new find included a Kahikatea seedling, brought by bird from a nearby urban forest remnant (e.g., Otari-Wilton Bush). A total of 500 observations were made by 15 observers covering 222 species. Results can be found here.

2 responses to “More reflections on #CitSciNZ2018 Wild about Workshops!”