For the third working group meeting of the NZ Landcare Trust’s ‘Citizen science meets environmental restoration’ project, my colleague Alastair Cole and I chose the West End Rowing Club. We’d been there previously to be part of a series of citizen science-themed presentations hosted by the Whau River Catchment Trust (who have since carried out a Bioblitz in the nearby Kurt Bremner reserve).

Overlooking the historically important Whau River, the location was an ideal setting for multi-layered discussions exploring a range of interlinked citizen science topics:
• Sourcing funding
• Providing educational experiences
• Using technology
• Collecting and managing data
• Collaboration, and the theme running throughout all discussion: Telling great stories
The session wrapped up with Where to from here?

Around 30 people participated, including project coordinators and managers from Auckland and Waikato Regional Councils, freshwater scientists, NGOs, Trusts and community environmental groups from as far afield as Aotea/Great Barrier Is. These categories however don’t acknowledge the many hats worn by participants, as many both work professionally as well as volunteer their skills for environmental activities. 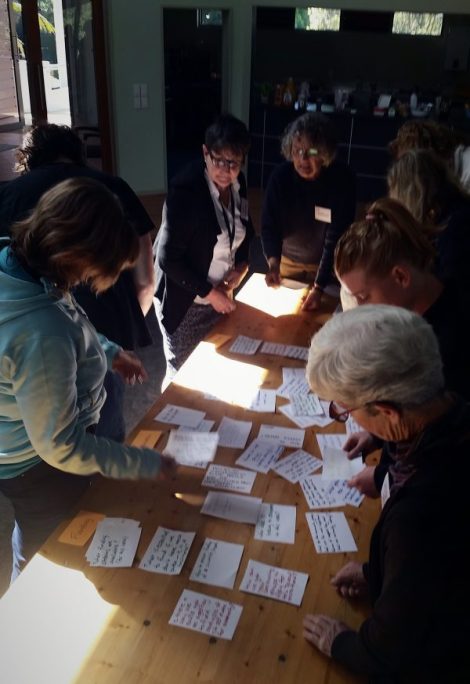 A snapshot of citizen science in NZ & the Participatory Science Platform
We began with an overview of the NZ Landcare Trust’s Inventory of Citizen Science in New Zealand, underscoring the diversity of projects/programmes underway where data can be submitted any time (‘ongoing’), data are collected e.g., seasonally for community predator control (‘repeated’), or ‘one-off’ events (like a BioBlitz). Dr. Sarah Morgan who heads the Participatory Science Platform in South Auckland followed, with highlights from the environmental projects that make up the pilot programme. Themes threaded throughout the projects are collaboration and the co-production of knowledge: groups are partnering with scientists to answer questions community members have about their local area, and using science-based methods to collect data.

Discussions
Instead of preparing a series of questions to dissect as occurred in the Nelson and Palmerston North meetings, this time we asked participants to write down their questions/topics for discussion on small cards while the presentations were underway. Participants then grouped related topics together and then developed discussion themes. There were as usual, many more questions than could ever be answered in a whirlwind 4 hr meeting. Participants were free to move around and join other discussions taking place at tables. At the end of this session, we asked each table to report back – here’s what they said:

FUNDING: What funding is available and how can the community access it in a fair equal way?
Two main hubs include givUS (formerly FundView) lists more than 1,200 funding sources for communities, volunteer organisations and clubs. Further hubs for funding information include Nature Space and the Department of Conservation (DOC). Crowdfunding via million meters can be used for stream restoration-type projects. The few funding sources are available for projects on private land include the DOC Community Conservation Partnerships Fund.

To help groups, Aslan Wright-Stow (NIWA) suggested creating an MOU with funders. Providing transparency on funding criteria and weighting scales would also help, as would producing a short expression of interest first, rather investing time in writing a full application. It was noted that rural users still have access issues with so many large file sizes.

Sourcing multiyear funding requires determination! Funders are generally attracted to ‘new exciting projects’ posing challenges for funding ongoing routine operational work. Reframing application content to cover funding for staff time has reaped dividends for Windy Hill Sanctuary, with Judy Gilbert highlighting the group’s provision of sustainable employment and training opportunities for the local Great Barrier Is. (Aotea) community – to the tune of over one million dollars. She also advocated for lobbying Lotteries for multi-year environmental funding, and to emphasize the long-term nature of environmental projects to funders.

EDUCATION: How not to make citizen science appear above the average citizen?
Education was broadly discussed from diverse angles, for example, the need for ‘closing the loop’ where community, scientists and policy-makers intersect as well as form part of an information cycle. This means the community generates data which are used by scientists to inform evidence-based policy which then gives shape to community restoration activities.

A real-life example is Wai Care, and Rachel Griffiths and Ruby Jones (both Auckland Council) described how the programme operated with different foci across sub-regions, i.e. Waitakere – data; North Shore – education; Manukau – action. Despite the programme using standardised protocols there are still issues with Auckland Council scientists and engineers even considering the data, let alone using it. Possible solutions include greater expert input to help validate the data, while Sinead Spedding (Friends of Oakley Creek) highlighted how technology such as apps can help with reducing errors when inputting data.

TECHNOLOGY: It’s not just about apps
Camden Howitt (Sustainable Coastlines) highlighted that resources can be mobile phone accessible but don’t have to be an app. Apps however can still be used out of range with data downloaded when the device comes into range. Projects such as the Great Kereru Count use simple methods to collect data, with observations able to be logged via computer/laptops, tablets and smart phones. 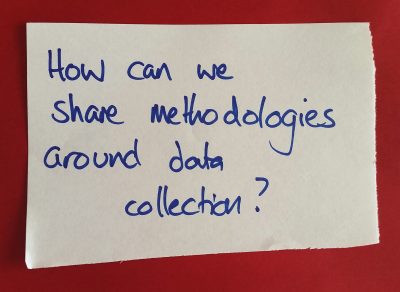 While technology can reduce costs associated with data collection, analysis and sharing, the question still remains as to who the best agency is for deciding/advising on citizen science technology (including the best equipment and methods). In many cases, it’s been a grassroots approach with groups/individuals developing an idea and then finding the expertise to refine the methodology – the newly released Maui Dolphin Sightings app is a great example.

Centralisation was again raised with debates centring on the utility and feasibility of a networked centralised online system for citizen science for easily communicating results, news and successes to a mass audience. In the absence of a centralised database, options include consistency in data management so that databases are interoperable.

Acknowledging that not everyone has a smartphone is important although by 2018, 90% of New Zealanders are predicted to own one. A further challenge is software upgrades that may not be compatible with older phones.

DATA: Can a nationally accepted toolbox of standardised, compatible protocols be developed?
Hazel Meadows and Rebecca Goffin (Auckland Council) both highlighted the need for a flexible suite of protocols that that can be adapted to different levels skill in the community. Natalie Wilkinson (Whau River Catchment Trust) reiterated that data collection shouldn’t be seen as intimidating by participants, and recommended starting simple so that people aren’t put off. 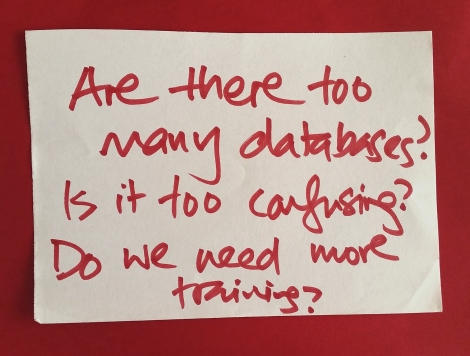 Groups such as Pest free Kaipatiki are at the early stages of evolution questioning what they need to know for initial and ongoing assessments. Others such as Windy Hill are lucky to have a retired ecologist at the table, enabling them to get started in the ‘right way’. However, the dilemma still exists with changing data collection methods to adopt a newer more standardised system, potentially losing previous datasets.

Best practice for project design includes determining the purpose of data collection as well as the audience. While some my focus on testing theory, participants also urged that the ‘joy of discovery’ not be forgotten. This relates to maintaining ongoing engagement with data collection through considering how participants will be supported, motivated and incentivised. A further aspect is methodology and equipment suited to the skill/training level of the participants, and tailoring data collection to community wants/issues in their local area. However, by taking a catchment approach, there are opportunities to connect and support projects, harness collective energy, and create more significant data sets. 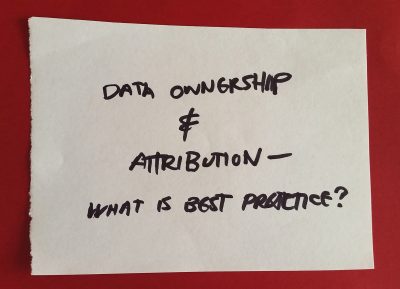 Several questions were raised around how awareness of community data within council can be raised and how these data can be valued. Finding a way to publish community citizen science data/projects may enhance their credibility along with targeting research to better support/promote citizen science.

COLLABORATION: Who’s doing what, where, how and why?
Strong collaboration underpins citizen science and Janet Cole (Kaipatiki Project), suggested that collaboration outcomes be built into project design. Regular networking events such as the Auckland Stem Alliance also create necessary opportunities for meeting face to face and sharing information while at a national level, central regional repository for groups including their information and data is required along with national steering and advisory group for Citizen Science in NZ. To some degree Naturespace NZ and Nature Watch NZ provide a platform for group and their data.

Collaboration with science professionals is required to increasing utility of data, i.e. build trust and rigour in the data via science input into project design and methodologies. Further input here includes an accreditation scheme for data collection as well as designing resources for training community members to collect quality data. Training is integral to good data collection and should be built into the early stages of the project. From the Windy Hill experience, Judy described how partnerships with the local board, industry and Auckland council can be leveraged to trial new tools for ecological restoration.

A positive example of strategic and well-supported collaboration is the UK Open Laboratories State of the Environment report, a citizen science initiative based on sound science and engaging hard to reach sectors of society to collect useful data to inform policy. On a related theme, Natalie Wilkinson raised the potential to collaborate with a large number of groups with not necessarily connected to nature. DOC, for example, has promoted Mental Health Awareness Week.

COMMUNICATION: Telling great stories
Threaded throughout the meeting was the emphasis on ‘telling a good story’ by way of selling ideas to potential funders and conveying key messages out to the public and through institutions supporting projects/programmes. Garden Bird Survey Facebook posts feature images of birds by project participants (not only during the period of data collection) accompanied by byte-sized stories and threads of commentary, e.g., on bird behaviour.

Where to from here?
Over the course of the project (2015-2018), a total of 3 working group meetings will be held in each of the four regions (Dunedin, Nelson, Palmerston Nth, and Auckland). With the first round of meetings almost concluded, Alastair and I are thinking hard about how to maximise the value of this small project. Slowly but surely, the combined input from the diverse participants is helping to define best practice for citizen science in New Zealand. One suggestion for a future workshop/working group meeting included how to make data meaningful. With data central to shaping restoration management, quantifying restoration progress and providing evidence of this to funders, getting the most out of data is central to running an effective project.

Any ideas? Don’t hesitate to contact me, Monica, or my colleague, alastair.cole@landcare.org.nz 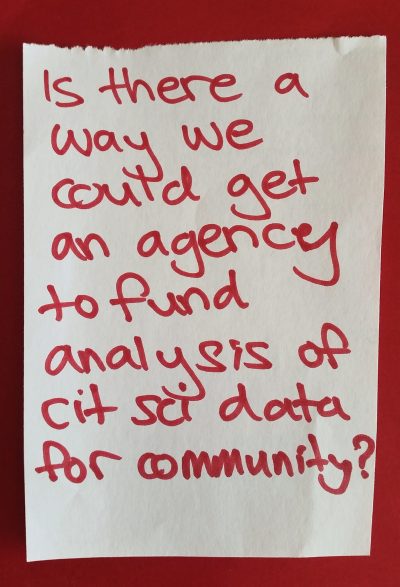