No matter that we live in an era where there are more ways to communicate than ever before, nothing beats getting diverse folk in the same room to share knowledge and grow ideas. I sat in on the third (and final) day of the annual Sanctuaries Hui in Hamilton, for the community soapbox session: snapshots of activities in pest-proof fenced and unfenced sanctuaries around NZ and for the panel that followed.

Alan Saunders (Waikato Regional Council) remarked on a significant shift: in earlier Sanctuaries Hui (meetings) discussion was predominantly focussed on the science, but now encompasses far broader socio-ecological concerns. The ambitious goals, the resources required to establish and sustain sanctuaries all require a solid foundation of communication, communication and yet more communication to gain traction. The annual hui which bring together sanctuary managers, volunteers, scientists and representatives from government agencies and NGOs is part of this process. While the word ‘collaboration’ is firmly embedded in management parlance, ongoing ‘negotiation’ with all of its edges and compromises is probably a more accurate way of describing communication dynamics.

In contrast to many community-led environmental restoration projects, sanctuary projects seek to restore ecosystems – though not necessarily to a pre-human state. Many sites cater for diverse uses: Tawharanui (managed in partnership with TOSSI) includes a working farm and is a haven for surfees, while historical factors shape others. Shakespear (managed in partnership with SOSSI) also lies on the east coast of Auckland, with Defense Force land, Maori earthworks and an early 20th century homestead (now a YMCA lodge) as part of the landscape. Commonalities that have helped create the loose network of 81 sanctuaries from the Far North to Rakiura/Stewart Is. are to:
• eradicate the full suite of pests (or achieve near-zero pest densities)
• reintroduce missing, rare and endangered species
• involve local communities in restoration efforts 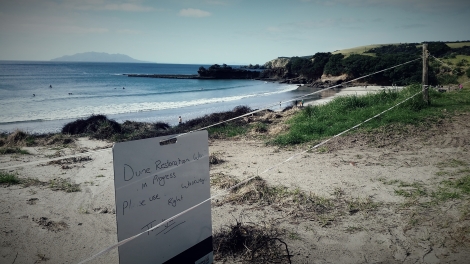 Seeking funding e.g., to sustain and expand restoration, education and advocacy activities is an ongoing task, although (thankfully), Friday’s conversations were not dominated by fiscal concerns. Despite major socio-political and economic challenges, sanctuaries have instead proliferated.

Volunteers contribute $26,000 worth of labour annually to the Brook Waimarama Sanctuary on the outskirts of Nelson city

Some projects that started at a modest scale, have spread across the landscape. The Karioi – Maunga ki te Moana (Restoring biodiversity from mountains to sea) is one such initiative. In this project along the rugged west coast from Raglan (Waikato), predator control is integrated into novel environmental education programmes for school children. These Karioi Rangers learn how to be bush savvy, combining survival skills with practical restoration know-how. This way, they’re geared up to be future volunteers, and are equipped with knowledge and experience to enhance their employability. Great Barrier Island’s Windy Hill Sanctuary, a much longer running project has created employment on an island where opportunities for earning an income are scarce. With $2 million in funding received over the last 17 years, $1.4 of which has been put back into the local economy, supporting paid conservation employees.

You can’t tell people what to care for

Matt Maitland (Auckland Council; Tawaharanui/TOSSI and Shakespear Open Sanctuary Societies/SOSSI) made the comment to highlight the diversity of opinion and interest within any given project area. Attempting large scale restoration projects has also resulted in many failures. Plans to eradicate rodents on the remote is island of Tristan da Cunha (pop.270), were shelved despite lengthy, and detailed planning involving all members of the community. From what appeared to be support at first for eradication, strong concerns were eventually teased out: method of toxin distribution; effects on people and livestock and persistence in the environment. A similar story is now being played out on Lord Howe Island.

The aspirational Predator Free NZ 2050 was invariably a hot topic during the panel session (which also covered New Zealand changing demographic and engaging youth for the longer term in projects among other topics). A recently completed (but not yet released) study carried out on Great Barrier Island by independent researchers asked residents how the ecology of the island can be protected. If you read the Tristan da Cunha study, you’ll understand the importance of involving a 3rd party for information gathering. According to Judy Gilbert of Windy Hill Sanctuary, islands (with human populations) may prove to the ‘first cab off the rank’ in achieving predator-free status in NZ.

There is widespread interest in making predator control more effective and more efficient, both in terms of human and resource costs. For smaller projects, this would mean a greater area of predator control could be undertaken without necessarily increasing the cost. Reducing the plague-like rodent populations on Great Barrier Island is a priority for Windy Hill Sanctuary (unfenced), where 44,000 rats have been caught since predator control began in 1999. The group is actively experimenting with impregnating long-lasting lures with peanut oil, as this is what the local predators are accustomed to.

The learnings are continuous. John Innes (Landcare Research, and driver behind the Sanctuaries movement) pointed out that increasing populations of native birds in urban settings are challenging our assumptions about what it takes for native species to survive and adapt to highly modified environments. With New Zealand becoming a highly urbanized society – 85% of us are city folk, sanctuaries along with community-led local restoration initiatives are more important than ever before. The gains for biodiversity are significant as formal science, localized studies and long-term site-based observations clearly show. The people side of the equation is equally important: nurturing knowledge and understanding of what we have lost, what we are now stewards of, and could be in the future, providing conservation-based livelihoods, or just having a near pristine beach to surf from.