This blog is an adaptation of a keynote delivered at Austrian Citizen Science Network Conference #oecsk2019. The aim of my talk was to create a context for citizen science initiatives in Aotearoa/New Zealand, while highlighting key differences to Austria. The previous 3 blogs provide insights into the 3-day #oecsk conference.

A recently completed 3-year Ministry for the Environment funded project (2015 – 2018) enabled an overview of citizen science (within the sphere of species and habitat restoration) to take place. Alongside networking events, training workshops and a symposium (#CitSciNZ2018) an Inventory of Citizen Science Initiatives, Resources and Training opportunities (Peters, 2016) was produced. This was the first such overview to be developed. Concurrently, new sources of funding through the NZ Science in Society Strategy (MBIE, MinEd, OPMCSA, 2014) have supported a range of participatory science projects to be developed, which extend across other domains. These include measuring electric car performance; the quality of state houses; the science of composting, and the type and origin of litter on our coastlines. These projects are partnerships between universities, science research organisations, NGOs, schools, businesses, special interest groups and the public.

At nearly 27,000km2 NZ is roughly 3 times the size of Austria but with approximately half of the population. New Zealand was the last major landmass on earth to be settled, with the first Polynesians are thought to have arrived c. 700yr ago. With 20,000,000yr of isolation a unique flora and fauna evolved, collectively described as our taonga (treasures). In the absence of mammals (with the exception of 3 spp. of diminutive bat) avian fauna, including flightless species, dominated ecosystem processes before humans and their cargo of exotic flora and fauna arrived. European settlement began in earnest from c.1840 and major deforestation coupled with wetland drainage and infilling ensued. Exotic species have also taken their toll on native species, through predation and competition.

While the general public may perceive the condition of New Zealand’s native plants and animals to be ‘adequate’ or ‘good’ (Hughey et al. 2016), the 2019 State of the Environment report (MfE & Stat.NZ 2019) reveals the need for urgent and widespread action to prevent further declines in freshwater health and indigenous biodiversity. This is despite one third of NZ (i.e. the size of Austria) being government-administered conservation estate.

A diversity of community environmental group activities in NZ

The historical and ecological context for grass-roots citizen science in NZ (i.e. led by the community, largely for the community) lies largely within the widespread community-led ecological restoration movement. The most common form of citizen science is environmental monitoring carried out by individual community groups, often with technical advice provided by government agency land managers and scientists. Predator Free 2050 is a new nation-wide initiative to eradicate 3 key introduced mammalian pests from NZ (rats, possums and stoats), and builds on decades of community-led conservation activity. Community groups along with controlling animal pests, also control weeds, revegetate using native species, carry out education/advocacy with/for the community and write submissions to support better environmental management (Peters et al. 2015). Group numbers throughout NZ are unknown but likely to be well in excess of 1000. More groups are forming with new funding through predator/pest free programmes.

The differences between cultures can be both obvious and subtle. The mode of personal introduction is a useful starting point when attempting to provide insight into Māori culture (as a European NZ’er). While Europeans will generally put forward their own name first, for Māori, the individual name comes last. A pepeha, a formal personal introduction connects the person to ‘their’ local landscape features (mountain, river), ancestors, marae (tribal meeting house). Only then is the person’s own name given.

In developing a Wetland Restoration Handbook (eds. Clarkson & Peters, 2010) the focus was on providing technical advice with case studies to describe how the techniques were applied in NZ. The culturally-centred wetland restoration guide, Te Reo O Te Repo (Taura et al. eds. 2017) is far from simply being a translation of the earlier book. Entirely different ecosystem indicators are used and protocols in the form of social as well as socio-environmental interactions take central place. There are synergies between matauranga Māori, indigenous knowledge and citizen science – both test concepts and co-produce new knowledge. However, differences are distinct given each is grounded in a different cultural tradition and worldview.

What have we achieved for CitSciNZ? What are the opportunities?

The four key factors integral to supporting and encouraging the growth of citizen science in NZ are interconnected and interdependent.

A 3-day citizen science event #CitSciNZ2018 comprised ecological monitoring workshops and a one-day symposium centred on citizen science in NZ and internationally. The interest generated in the event and diversity of participants (Government Ministries, NGOs, universities, land management agencies, museums, science providers and community members) confirmed growing interest. There are opportunities to expand the scope of cit sci, particularly in the management and recovery of natural and manmade disasters.

Although clear definitions of cit sci in government and agency documents are still lacking, the inclusion of cit sci as a concept (e.g., in the Roadmap) indicates an emergent acceptance of what cit sci can offer – above social engagement. A shift is needed from short-term science engagement and experimentation to a longer view where citizen science is recognised a standard of research practice. 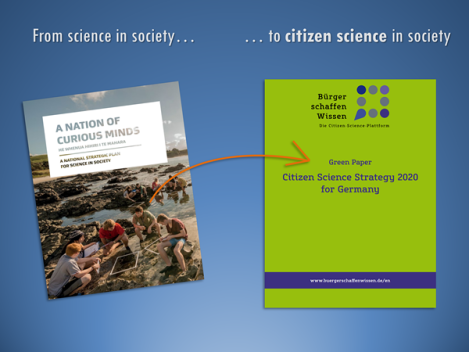 To action policies and plans, on-ground infrastructure is needed. At present, ecological monitoring is woefully underfunded and training opportunities for community members in this area sporadic. Although tools (such as Trap.NZ and CatchIT) have been developed to harness, store, analyse and visualise predator control data and tools such as SHMAK for freshwater, comparable online tools for flora monitoring are still lacking.

To validate citizen science, investigations into the outcomes of engagement for participants, coordinators, partners as well as science outcomes (e.g., what data are generated and how they are used) are needed. Frameworks have already been developed to facilitate evaluation that could be adapted to suit the NZ context (e.g., by Phillips et al. 2014 )

A Vision for Citizen Science in Aotearoa/New Zealand

The field of citizen science has burst into flower and matured. Based on my observations and experiences, these 3 points summarise my thoughts on the directions to pursue in NZ. 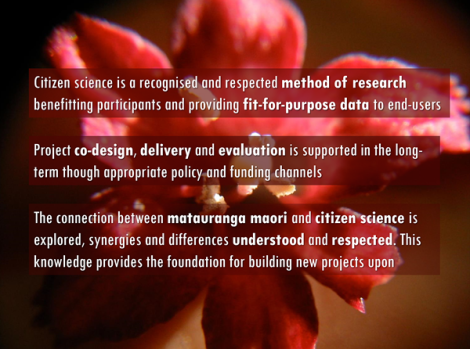 A vision for citizen science in New Zealand

MBIE et al. 2014. A Nation of Curious Minds: A National Strategic Plan for Science in Society. 52p. Available from: https://www.curiousminds.nz/assets/science-in-society-plan-PDF.pdf