The 15th Sanctuaries of NZ (SONZ) community of practice was the largest gathering yet! The aim of bringing together community trusts, land/wildlife managers, iwi and scientists was to provide insights into the social, ecological and economic ‘landscape’ of sanctuary projects (underway and planned) around NZ. Around 120 people came together for 3 days (Aug 14-16, 2018) at the Hamilton gardens: a combination of new, established and ‘old hands’ who have shaped and created a dynamic but coherent structure for progressing the sanctuaries movement.

This series of blogs (Day 1, Day 2, Day 3) is simply an overview of some (not all) talks and resulting discussions. All presentations will feature on the sanctuaries website along with those from previous years.

Sanctuaries of New Zealand is an informal network of more than 80 protected areas that aim to eradicate the full suite of pests (or achieve near-zero pest densities) from their sites; reintroduce missing species (incl. rare and endangered species) and involve local communities in restoration. Biodiversity sanctuaries in NZ cover a range of forms:

Predator resistant fences: this movement started in the early 2000s with Maungatautari Mountain (Waikato) and Zealandia (Wellington city). Pests inside the fence can be controlled while climbing and burrowing animals are prevented from entering. Partially fenced sites such as Tawharanui, Cape Sanctuary and the proposed Northland project occur across peninsulas.

Mainland Islands: these employ an intensive network of traps for pests (such as Auckland’s Ark in the Park) with some also using aerial control (1080). Dept of Conservation (DOC) and Zero Invasive Predators (ZIP)-led initiatives focus on experimentation with new equipment and practices and adaptive management.

Offshore islands: these have been a vital testing ground for pest eradication tools and techniques. To date, over 100 islands have been declared free of introduced pest mammals with sub-Antarctic Auckland Is. the largest and extremely complex (i.e. terrain, pest type and remote location) next in the pipeline.

Critiques of (fenced) sanctuaries have focused on the cost and ongoing maintenance required; their ability to sustain populations of native biota as well as a lack of data to support claims of beneficial outcomes for biodiversity (See Linklater and Steer 2018; Scofield et al. 2011). There are few published studies on biodiversity outcomes from sanctuaries (see Further reading), precipitating attempts by Sanctuaries of NZ (SONZ) leaders and researchers to harness data across projects for metanalyses of flora and fauna monitoring results. 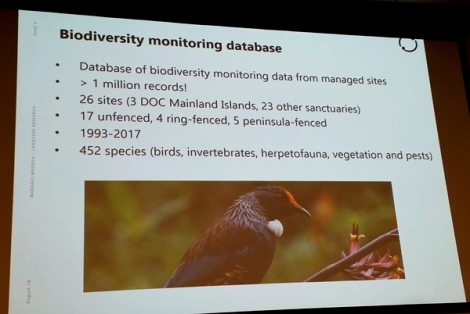 Although different monitoring methods used across sites complicates analyses, there are now over 1 million records from across NZ Sanctuaries. Rachelle highlighted that learnings from these projects are vital for setting realistic objectives for conservation by learning about thresholds for pest animal control. She showed that in some Sanctuaries populations of native bird species increase, while others decline after an initial increase. While these competitive interactions and natural reordering of the ecological community may complicate how ‘success’ is defined, Rachelle stressed that we need to build understanding of which species are likely to increase in order to establish realistic conservation goals.

Native flora and fauna – how do they fare?

Our most deeply endemic bird species (see graphic in the Taonga of an Island Nation, p41) have a strongly positive response to being in pest-managed sanctuaries. At the same time, there is a marked trend showing native bird increases over time while exotic bird species decline. If birds and plants are aggregated, there is an amazing improvement in our biodiversity over 20y despite noise in the data.

Data are patchier for other species. Most lizard monitoring, for example, has only occurred following pest control, or only within managed sites – not uncontrolled sites.

Rachelle’s study has been a long-time coming owing to the diversity of approaches across sanctuaries, the physical variability of sanctuaries and resourcing among other factors. Unsurprisingly, Rochelle stressed the need for consistent, long-term monitoring of biodiversity outcomes and residual pest abundance along with standardised methods and measures, data sharing and reuse and effective data management methods. This was also widely raised during citizen science workshops/meetings so remains a widespread need to be addressed.

Cate Macinnis-Ng (University of Auckland) revealed how little data we have on climate change effects in NZ (See Lundquist et al. 2010; McGlone et al. 2010). For example, although plant deaths due to drought are increasing over time, can this be attributed to climate change? We do know that effects overall will be highly variable in NZ due to maritime climate and topography though there will an increased risk of fire danger and sea level rise. For Sanctuaries, a major issue is their limited buffering capacity due to their relatively small scale. Cate reiterated the call for long-term, accessible data sets supported by better data management policies. 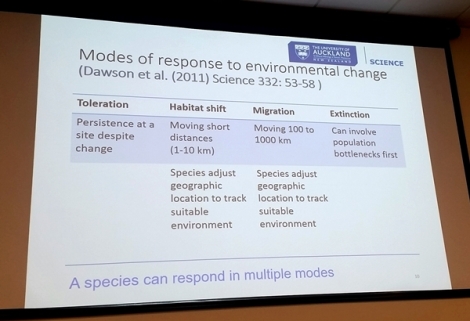 The diverse modes of response to climate change by species. Slide: Cate MacInnes-Ng

Amanda Haigh (DOC) gave us a crash course our unique frogs who it turns out, don’t have the ability to fold their legs in as they land… they simply belly flop. This is a feature of ‘ancient’ frog lineages and doesn’t help escape from predators. Small, cryptic and patchy, sparse distributions, the 3 species of ancient frogs found here (Hochstetter’s, Archey’s; Maud and Hamilton now combined) are understudied and all sit within various ‘under threat’ categories. 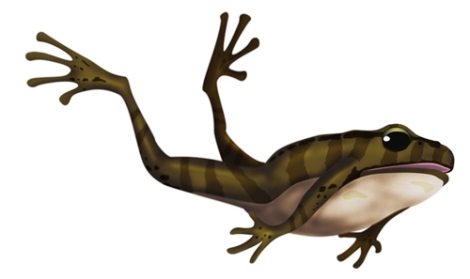 The disctinctive landing style of a Leiopelmatid. Illustration: Lewis Hurst for NZ Geographic

Dogs have been used for conservation in NZ since the 1890s to sniff out protected birds and reptiles, invasive mammals, invertebrates and plants, but not aquatic species. Claire Brown (University of Waikato) set out to answer if carp, catfish and gambusia can be detected, cheaply and efficiently at low densities by training dogs for the task – early detection means the ability to manage/control fish before they become harmful to the ecosystem. Most dogs in the study – family pets of varying shape, size and personality – passed muster and enjoyed their rewards (food, of course). Claire emphasised that dogs can help promote social engagement by being ‘the friendly face of conservation’ – some even have their own social media feeds!. The frequent chuckles from us while watching videos of the dogs undergoing their training clearly showed that we all agree. Some conservation dogs even have their own social media feeds…. 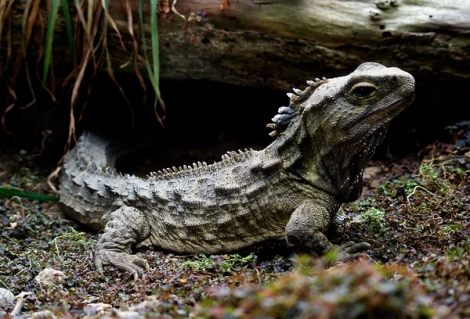 Tuatara (Spenodon punctatus) are the last survivors of an order of reptiles that thrived in the age of the dinosaurs. once lived throughout the mainland NZ but have survived in the wild only on 32 offshore islands

Restoring biodiversity is a complex business. Humans modify and destroy environments but are also the key to rebuilding them. Conservation is all about people. David Towns (Auckland University of Technology), Margaret Stanley (Auckland University) and Pip Wallace (University of Waikato) all discussed the socio-cultural and ecological complexities of working at a landscape scale though from differing viewpoints and in Pip’s case, academic disciplines.

Straight-forward scientific issues can be complex social ones

David Towns (quoted above) provided retrospective insights into the process for removing kiore (Rattus exulans) from Hauturu-o-Toi (Little Barrier Is, Auckland). The island is very special: large (3,083 ha), densely cloaked in forest and home to a broad suite of threatened flora and fauna. Kiore were present on the island and were introduced to NZ by Polynesian ancestors around the 13th C. They are known to affect flora, seabird and tuatara recruitment, and suppress herpetofauna and invertebrate populations.

In the early 90s, I walked the rugged tracks of Hauturu-o-Toi to replenish kakapo feeding stations before the kakapo were all relocated to more suitable habitat elsewhere. Photo: Kathrin & Stefan Marks_Flickr CC

However, negotiations to eradicate kiore from Hauturu-o-Toi spanned 9 y due to social/cultural constraints, contradictory knowledge, the interconnectedness of issues and differing opinions of what should be done and how.

There are 3 hapu (subtribes) connected to the island. To one, kiore are taonga (treasured) and should stay on the island, but to another, tuatara are taonga and kiore should go. The underlying issue here was governance – which of the 3 hapu had the right to decide on the island’s future management. At the same time, Friends of the Earth mounted a legal challenge to prevent predator control, claiming the proposed methods were inhumane. To move ahead, researchers invited the Friends to help design a monitoring program which at the nth hour, resulted in the challenge being withdrawn.

Following kiore eradication, existing species and habitats benefited, while some populations remained the same (hihi/stitchbird & Duvaucel’s gecko) and unexpected effects also occurred e.g., Vespula wasps disappeared, storm petrels (re)established and the forest ringlet butterfly reappeared. Another unexpected outcome of kiore control was the acknowledgement that Ngati Manuhiri had strong grounds for grievance. They formed the original residents and kaitiaki (stewards), but were evicted in 1896 following the establishment of the island as a nature reserve. A Settlement Act was finally drawn up 2012 leading to the island being vested with iwi and then vested back to crown, restoring the mana of ownership to Ngati Manuhiri. A co-management agreement between the tribe and the Crown is now in place.

Upscaling conservation into ‘our big backyard’

The North-West Wildlink project is currently being revived. Pest free islands in Hauraki gulf (e.g., Rangitoto and Tiritiri Matangi) form biodiversity ‘anchor points’ that extend via a network of existing and proposed greenspaces and restoration projects across the upper Auckland isthmus to the Waitakere Ranges. There are both social and ecological goals, each serving as the foundation for the other. Margaret Stanley described the complexity of working at a landscape scale as a microcosm of Predator Free NZ: a matrix of urban, peri urban and rural sites, the need to work with community groups as well as individuals and to scale up existing conservation initiatives. Further layers are added when looking at other nearby large-scale projects such as the Forest Bridge Trust and Reconnecting Northland.

Through an ecological lens, Margaret stressed ‘knowing the landscape’ e.g., identifying threats such as weeds that may impact on healthier sites, understanding pest movement through corridors and the spatial effectiveness of pest control. This also means identifying best groups to work with e.g., the mountain bike community – not necessarily conservationists, but whose input could contribute to achieving the North-West Wildlink project vision.

Spatial protection for wildlife: Issues in law and planning

Pip Wallace’s PhD research investigated the treatment of 6 different avian species in NZ across fragmented landscapes, ‘lawscapes’ and planning instruments, all of which compete against social, economic and cultural factors. Her more recent works investigates the tendency to protect habitat via lines on maps (i.e. in 2D) when better provisions are needed across depth and time (i.e. in 3D and 4D). This would deliver better spatial protection for species and habitat – especially important for connectivity and wildlife movement. This throws light on the need for integrated legal protection for wildlife throughout all media – air space, land (including the subterranean) and water bodies.

Pip also pointed out gaps in spatial protection which include limited use of spatial protection for connectivity, abrupt boundaries between protected and non-protected areas with buffer zones lacking and a lack of an integrated approach to protecting significant habitat. An example of an approach used overseas is developing ‘concentric circles’ around protected areas. Depending on placement with the circles, differing levels of consultation on land use activities and potential effects on threatened species would take place.