Morning walk to the conference venue over the Mississippi River

It’s always interesting attending large international events when you come from a small country that on Eurocentric maps, appears perilously close to the edge of the earth. With around 500 people attending the 3-day conference in St Paul (MN, USA, May 17-19), it was a dynamic immersion into the world of citizen science (CS). A focus was promoting the professionalization of the field. My notes don’t chart a chronological course through the event – Muki Haklay has again produced a sterling synthesis detailing Day 1, Day 2 and Day 3. It is simply my notes from talks attended and reflections from a country where citizen science takes many forms but lacks the overall leadership and strategic direction currently occurring in the US, several European countries and in Australia.

Contents
This post is a looooong one and is divided into the following sections: 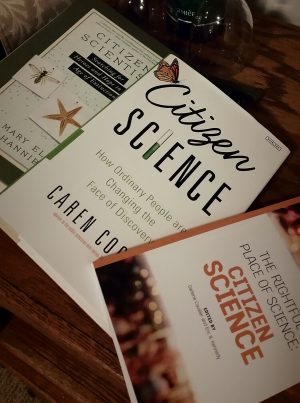 ACSA rep (Australian CS Assn) and PhD student Jesse Cappadona facilitated the ‘grand conversation’. She highlighted how most Australian CS projects are biodiversity-centred, although being part of the global mosquito programme now adds a biomedical angle. She outlined the structure for ACSA which has support from the Australian Museum as well as Inspiring Australia and the Atlas of Living Australia. See Storksdieck et al. 2016 for a description of the three main CS Associations (Australia, Europe and US) in the context of ‘regional knowledge, global collaboration’.

Darlene Cavalier (CSA Board Member, SciStarter and Science Cheerleaders Founder) outlined the range of initiatives designed to connect people to projects and grow citizen science among teenage girls. SciStarter now hosts hundreds of (mostly environmental) projects: From global (480 projects) to a specific location/range (328) or address (293). A total of 400 projects are online only i.e. computer or smartphone-based.

Muki Haklay (University College, London) highlighted the diversity of citizen science across Europe reflected in the wide range of cultures and languages. However, variation in levels of education and access to technology between countries have resulted in multiple inequalities at local, regional and international levels. Some countries are very active, particularly Germany, Austria, the UK and Spain while others, such as the Balkans, are not. The Europe-wide DITOS programme (lead by Haklay and team) seeks to level the playing field by (1) actively encouraging broad civic participation on grass-roots projects; and (2) building institutional capability supported by enabling policies.

Elizabeth Tyson (Wilson Centre, Washington DC) outlined how universities in China are seen as ‘hotbeds of dissent’ and NGOs (e.g., the Institute of Public and Environmental Affairs, Greenovation hub, Birding Beijing and Green Hunan) are instead leading the way for citizen science action. Although a Chinese ‘Open Data Law’ has been established which should underpin citizen science, issues lie with implementation. Additionally, a new law may restrict international collaboration with foreign organisations and their local partners (working e.g., on environmental issues) now requiring a Chinese sponsor and police registration.

The session wrapped up with a summary of four elements key to developing CS (in any country): funding mechanisms, enabling policy/law, strategic documents as well as academic support and associated research.

More and more platforms and tools…

A Create Together Day (hosted by the University of Minnesota) was one of many events marking the start of the conference. Attendees could pitch their projects unconference-style and then work collaboratively with interested parties to find solutions. With so many project platforms (e.g., Zooniverse, Citsci.org) as well as spatial/mapping tools (e.g., ESRI GIS) available, participants were able to work with experts and find the best fit for their projects/programmes.

Over the next two days the array of web-based platforms for hosting projects/datasets expanded to include Bowerbird (Australia – a ‘socially networked, community, biodiversity workspace’), iNaturalist, Fieldscope – (US – ‘networked field study projects’), Citsci.org and the multi government funded Global Biodiversity Information Facility (GBIF) that seeks to make data ‘freely and universally available for science, society and a sustainable future’

I am left with the question of which platform do you choose? What are the pros and cons of one over the other? A decision tool that includes e.g., potential data use (climate studies etc.), which databases are interoperable, and how support is provided …would be extremely useful here. Interoperability was touched on by the new Global Mosquito Alert Programme. Similar initiatives around the world (e.g., Muggenradar, ZanzaMapp, Invasive Mosquito Project) are currently being brought together to asses overlaps (protocols, methods and tools), investigate data platform infrastructure and interoperability challenges.

To support for project development, Zooniverse has a self-nominated group of beta testers available to trial and refine new projects. Other platforms, such as the national Australian marine species distribution programme REDmap rely on purpose-built infrastructure. To support the collection of quality data, species identified by the public are automatically sent to the relevant scientist for verification, and if the photo or details can’t be verified then the sender is emailed with further questions. 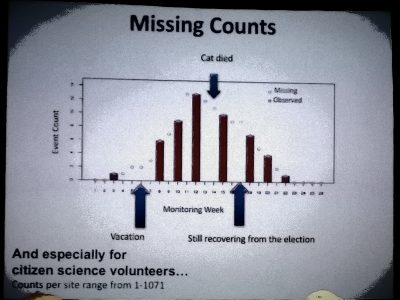 Volunteer retention (the ‘citizen’ of CS) forms an ongoing area of discussion. Although best practice links directly with understanding volunteer motivation (see Geohegan et al. 2016), large drop offs appear to be common for crowdsourced, online projects. The emphasis here was on nurturing the long-term volunteers who provide a disproportionate amount of data. One important aspect was to provide volunteers with choices around how they could engage in the project. Gretchen Le Buhn presented a very pertinent slide showing how ‘life’ can impact on data consistency, and then spoke on how the limitations of CS data need to be accepted and appropriate analyses used to gain meaningful results. 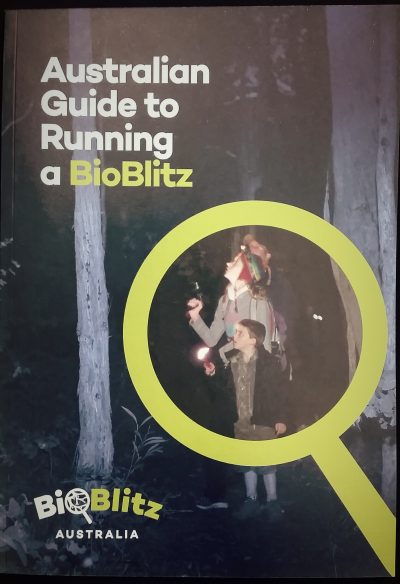 Australian Guide to Running a BioBlitz

Since having won a BioBlitz courtesy of Landcare Research (donated to the National Wetland Trust of NZ), these events are very much on my mind! The following summarises a mini symposium.

In Columbia, a BioConteo led by Fundacion ecoprogreso used a drone to raise awareness of an ecologically important mangrove area adjacent to the city. Fishermen and ecotourism organisations, community youth groups and students (school, under and grad students) were all involved and prevent training provided to students to deepen their experience. In other instances, the profile of the event may be raised via new discoveries as occurred in Vietnam.

Why do a single BioBlitz when you can run many at the same time?! Snapshot Cal Coast (est. 2106) is ambitious, with seven events occurring simultaneously. A ‘most wanted species list’ (also including observations of disease etc), was prepared in collaboration with science agencies and organisations to raise flags for management interventions. from @RebaFay

Technology is changing how BioBlitzes can be run

Data capture is changing with apps such as iNaturalist being used. The US National Park Service trains ‘Pro-users’ (‘data rangers/digi ambassadors’) to accompany groups of participants and provide tech support, ensure location settings are correct and help with a coarse level of species ID. Training for the role includes how they contributes to the BioBlitz, familiarity e.g., with the difference between web browser and smart phone app, how ‘places’ and ‘projects’ settings on iNaturalist work, and how tools for making good observations can be used. Contact Kelly Coy USNPS for training materials. Oh, and there’s an after party too to celebrate the great work!

Micro BioBlitzes are quite different, focussing beneath the scale of human visual perception… 100x and beyond. Traditional tools are too costly to use. New tools e.g., a ‘foldscope’ and mobile phone are available but require plenty of practice to use effectively. Others such as macro lenses that clip onto mobile phones are cheap: USD $5-10 (Amazon) and are easy to use broadening the scope of what is feasible for an ‘alternative’ BioBlitz.

To enhance scientific literacy for primary through to secondary school students, BioBlitzes can take place in the school yard. Learning is enhanced with events pre-, during and post- the BioBlitz. Event Coordinators meet with the teacher to define learning goals and design skill builder activities taking 10-20 mins: using binoculars, learning observation etc. as well as iterating the real-world application e.g., for field-based studies. Classroom projects are designed to look more deeply at data collected, using iNaturalist. Research grade data are entered into GBIF and the Encyclopaedia of Life.

To wrap up, event objectives will determine whether it’s better to have free form observation and collection rather than going out by taxonomic group with an expert (with science objectives of learning how to look and/or collecting scientific data). Both types can also be run simultaneously.

Upholding the integrity of citizen science

Day#2 opened with a candid conversation between LeeAnne Walters, mother and resident of Flint, Michigan and Virginia Tech expert on water treatment, Marc Edwards. Their conversation centred on the change of water supply to Flint residents in 2014 (to cut costs), resulting in discoloured and foul-smelling water issuing from their taps. Rates of illness (e.g., hair loss and skin complaints) increased, particularly in their children. The public water supply was later confirmed to have elevated levels of lead and other toxins. Over nearly two compelling hours, they narrated the journey of their partnership to find the truth and after three years, building trust is still ‘a work in progress’. They highlighted that many communities feel betrayed by science, with science having been used to support political agendas that do not align with community aspirations. To make matters worse, scientists and engineers continue to talk down to community members revealing an entrenched hierarchy between professionals and ‘non-professionals’ (i.e., community members).

Edwards described the unfolding of the Flint Crisis as ‘a war’. Rigorously set up CS water quality testing protocols were used at nearly 300 homes, with results showing levels of lead ranging from 5x EPA limits (27ppb) to levels defined by the EPA as toxic waste (5000ppb). Part of the war was to have the resulting data taken seriously. Six weeks after the results were released, combined with those of a study into elevated lead level in children, the environmental crime was finally acknowledged.

LeeWalters on keeping the moral compass of science:

You can’t argue with science if it’s being done right. We’ll keep doing it.

In the process of establishing citizen science as the means toward filling critical data gaps, Edwards and Walters also found themselves fighting pseudo-science. Not only were some individuals using seriously flawed protocols and finding bacteria that others weren’t able to find, the involvement of Hollywood actor, Mark Ruffallo also served to undermine citizen science activities through his own promotion of poor science. The result? fear and paranoia. Walters and Edwards also reported that water quality filters were also being sold to Flint residents for up to USD $5000 – bear in mind that 42% of Flint residents live below the poverty line.

According to Walters, injustices occur because they exist in society’s blind spots. If you expose injustices then people will care – there are problems with water systems and air all over the USA. CS can be a tool to shine a light on injustices. 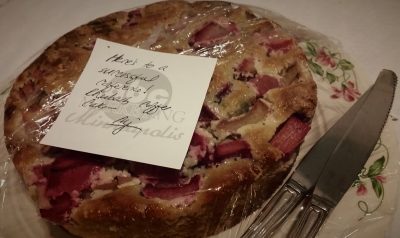 A gift from my generous hosts: a rhubarb and coffee cake to celebrate ‘a successful conference’. I devoured half of it in the blink of an eye…

One response to “#CitSci2017 …rough notes and various reflections on #citizenscience”