I’ll start with praise for the European Citizen Science Association in bringing together ‘Innovation in Open Science, Society and Policy’, attended by over 300 people mainly from Europe and the US with a handful from Oceania. This was the inaugural ECSA conference, and hopefully many more designed to bring together diverse people, throw ideas around and help shape future directions for citizen science practice, application and theory will follow.

Comprehensive and insightful blogs of Days 1-3 have already been published by Muki Haklay (Open College of London; Extreme Citizen Science, extreme multi-tasker too), so the following is a collection of conference components that resonated strongly for me: networking; funding, coordination and collaboration; the question of independence; overcoming barriers to participatory science…among others.

Conversations with movers and shakers
The people with whom I talked, joked and chewed ideas around with are numerous to list, but this cross-section is indicative of conference socio-cultural diversity: academics, social scientists, biologists and ecologists (both unsurprisingly with participatory leanings), social/digital and socio-digital entrepreneurs, software developers, experts in data management, teachers, project coordinators, initiators and participants, policy influencers, PhD students crafting research into traditional ecological knowledge, wildlife management and the sociology of citizen science… But of all conference participants (‘delegates’ is too dispassionate a term for such a passionate group), only around 15% were engaged in citizen science fulltime; 60% part-time and the remaining 25% as a ‘hobby’ (perhaps more accurately, as a pursuit where professional and personal interests overlap). 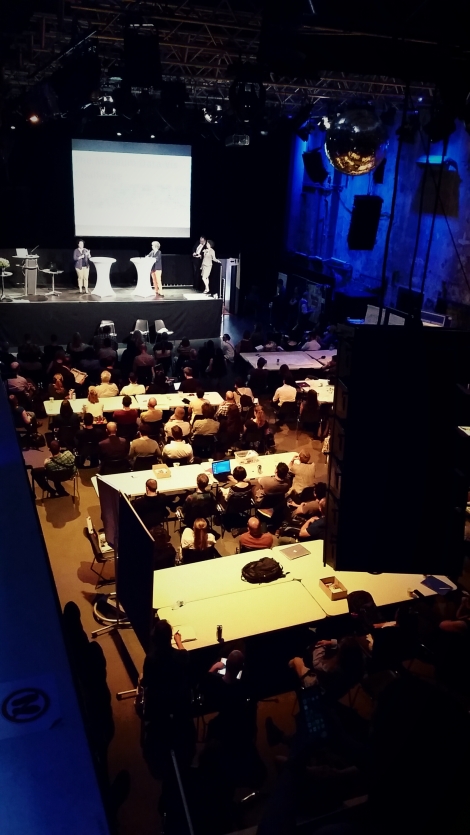 That question of funding
From a New Zealand perspective, the diversity and scale of projects along with the opportunities for collaboration across Europe and the EU were staggering. This is where living in a geographically country with a small population has its challenges. More precisely: 4.5 mil; ‘Last, loneliest, loveliest, exquisite, apart’, as eloquently described by Rudyard Kipling in 1891. Although reduced funding is universal, access to sources both national and international has enabled many impressive collaborations to grow and flourish. I’ll be watching the evolution of the new European Cooperation in Sci & Tech (COST) action and ‘Doing It Together’ Science (DITOs). The former project designed to bundle capacities across Europe so that the scientific, educational, policy, and civic outcomes of citizen science can be investigated and impacts better understood, and the latter project, a pan-European consortium of 11 partners that seek to implement a step-change in public participation in science and innovation. Another example with strong applications and implications for citizen science, is Science Learning+, jointly funded by the UK Welcome Trust and US National Science Foundation to understand the power of informal learning experiences inside and outside of school.

Coalition contract of the German Government, 2013

Transparency, access and openness go hand in hand with citizen science. New EU policies seek to embed science within society, enabling science to be more responsive to societal and economic expectations. By removing barriers and providing incentives for open science, knowledge circulation can be improved and innovation encouraged in both the public and private sectors.

Demonstrating success
A discussion on independence grew from a panel on ‘Demonstrating Success’ (Josep Perelló, OpenSystems ES; Arnold van Vliet, Naturkalender NL; Daniel Dörler, citizenscience.at AT; Doreen Walther, Mosquito Atlas DE; Louise Francis, Mapping for Change UK), and was expanded upon by Muki Haklay presenting on participant power relations. With a background in the NGO sector I fully recognise the value of effectively being a 3rd party operating as an intermediary and information facilitator between the public/special interest groups and government agencies. So yes to independence on a fundamental level although having an institution as a driver and director can enhance project capacity and reach, as well as lend credibility to the project. Independent groups may need time to build trust with institutions (and therefore credibility), but an advantage may be the groups’ potentially greater flexibility to adapt and respond to their project needs.

Understanding the citizen science landscape
While I am currently finalising the Inventory of citizen science projects, resources and learning opportunities for New Zealand, I met others engaged in similar tasks. Lisa Pettibone (Berlin Natural History Museum), reflected on the challenges of defining the field when participants don’t define what they do in the context of citizen science. There is also the issue of maintaining databases once project funding has ceased, as well as avoiding overlaps, for example between the existing EUMON participatory biodiversity monitoring portal and a new DITOs project to map citizen science monitoring projects and make their data available.

Working with communities
During the keynote by Heribert Hofer, Director of the Leibnitz Institute for Zoo and Wildlife Research, a challenge was put forward to change scientific culture as well as the infrastructure that both supports and promotes it. Based on extensive experience of participatory research in Africa, he outlined key issues, their causes and solutions:
Ivory towers resulting from scientists driven by academic agendas; an academic reward system defined by academic success superseding societal concerns; a lack of experience linked to a lack of confidence; arrogance linked to low expectations of working with community members; grant systems not leaving enough time for co-design; and finally, a loss of control resulting from ‘the horror’ of not knowing the research question in advance. Key culture and system changes necessary included modifying the key performance indicators for science; upskilling scientists and providing funding for co-designed projects, and providing evidence that co-designed projects ‘are worth it’.

A conference of ‘firsts!’
As well as being the first ECSA conference, it was also first on a number of other levels (at least for me). So… conferencing in a brewery (an ideal place for a ferment of ideas!); watching flecks of blue light issuing from a disco globe skate over presenters during speed talks; swapping ideas while seated in deckchairs (conference venue), dining on tapas (Spanish restaurant), in the company of dinosaur skeletons (Berlin Natural History Museum), and while eating a salad of foraged leaves and flowers in a local park (conference field trip with Mundraub); think-tanking, disco-ing; eating regional specialities cooked right then and there while listening to enlightening lightening talks… A conference is more than just talks and talking. It’s the skill of the organisers in creating an atmosphere the encourages and builds meaningful exchanges, after all, networking and relationship-building is why we attend. Thanks again for ECSA for such a fabulous event.

2 responses to “3 Days of international citizen science in Berlin: perspectives from #ECSA2016”