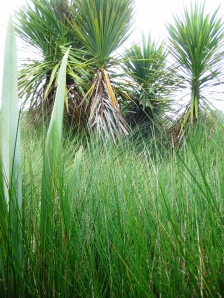 Wetlands are often referred as the barometer catchment health, but their function as barometer of the health of the people is often overlooked (or frankly, just ignored).

The biennial National Wetland Restoration Symposium (Auckland, Feb 12-14) once again brought together a cross-section of over 180 practitioners, scientists, consultants, land managers and others enthusiastic about the remnant damp places in our landscape. The goals? Network, share and learn.

To embrace the diversity of community-driven wetland restoration is simultaneously to better understand the both the projects and their people. At one end of the spectrum are groups that are strongly results driven. They start straightaway with the practical work: removing weeds, replanting, pest control. Their goals can be a mix of pragmatic and altruistic: “I developed this land in the 70s (said with an ironic glint in his eye, while pointing to the tidy fields that are the hallmark of good agriculture), so I thought I’d better give something back.” The act of giving something back is no mean feat: it’s a hell of lot of hard work.

By contrast are projects that start by piecing together a picture of the landscape and a narrative of its past and present inhabitants. Though the desire to bring back indigenous biodiversity to e.g., a degraded swamp may be an important goal, understanding the broader context, impact and opportunities is central to designing a project that over time, provides multiple benefits to both land and people. A historical landscape perspective for example, features in Dame Anne Salmond’s restoration work at Longbush Ecosanctuary, a stone’s throw from Gisborne. The detailed research (which Dame Anne excels at) integral to the project would horrify some groups intent on “…just getting on with the job”.

Along the same lines is Tangonge in the far north, returning to local whanau, hapu and iwi by way of a Treaty of Waitangi settlement. It is an ambitious project to re-create vanished wetlands: the nearby “Lake Road” ends in a thoroughly agricultural cul-de-sac. The 100-year project time frame is in itself a considerable challenge for goal setting and keeping up momentum, but this may be what is required to revive what was “a taonga of spiritual, intellectual and physical significance.”

In the Waikato, restoring the relationship to a wetland such as Toreparu is to restore the intimacy to a place, where “… no part was unknown, unnamed or unused”.

These three talks were eloquent, absorbing and inspiring. Broadening the type of wetland restoration discussed in the parallel science/management sessions to include well-being and human relationships creates a challenge both for defining and measuring project success. Dame Anne Salmond, however, is very clear on this account: success is prosperity and abundance.