The more I think about the broad topic of citizen science, the more questions are raised around the notion of culture.

In both the US and UK, nationwide projects harness observations made by the general public to answer questions e.g., on species populations and abundance. Birds are a popular choice. For over a century, the US-based National Audubon Society has mobilized large numbers of volunteers for annual bird counts – the British Ornithological Society is not far behind. These programmes are enormously successful because they simply build on what people are already doing. We’ve all met avid birders – I cherish a memorable conversation with Barry, digital recorder slung around his neck. Sentences were punctuated with phrases like ‘2 kaka heard, not seen’ so that the conversation was really between myself, Barry and all of the birds (seen and unseen) in the surrounding forest.

Citizen science projects exist on a spectrum of participation and engagement between specialists (e.g. scientists) and non-specialists (e.g. community volunteers). Traditional bird surveys might be described as consultative, being scientist-led with volunteers in the role of data collectors. By contrast, community-based monitoring is where volunteers develop the projects, collect the data, and on occasion analyse the results too.

It’s the latter that I’m interested in, and this project type seems most prevalent in NZ. In these projects, volunteers use science-based methods to measure aspects of their restoration project sites. For most, it’s learning not only new methods but a new way of experiencing and understanding the results of long hours spent trapping pests or pulling out weeds. If I think of Barry, I don’t know if he would or even could describe his ongoing need to document his observations both visual and aural, it’s just part of who he is. In that sense, it’s already part of his culture. In desiring (and to some degree) expecting groups to take up the challenge of bringing science into their projects, ultimately it is about those tools and methods also becoming part of that groups’ culture.

The upcoming questionnaire (a summary is under the ‘Community Questionnaire’ tab) will answer some basic questions around community groups, their projects and environmental monitoring. It will provide a starting point for understanding what science is used, for what purpose and what groups want to measure in the future. It will also shed some light on what type of technologies groups may use in the future.

After crafting and re-crafting questions over the last few months, I may not be able to answer much around notions of culture, but I’ll at least be provided with some insights by the community. I can’t help wondering what Barry would think of all of this… 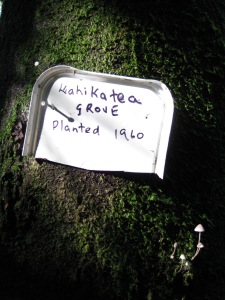