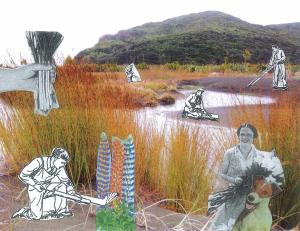 Community-based environmental monitoring or just volunteer monitoring forms a subset of activities under the umbrella of citizen science. It’s about people, community members, non-scientists getting out there and collecting data.

It’s an ongoing area of interest for me, central to my research, and one that’s becoming increasingly important. In a nutshell, budget cuts have lessened the capacity of government agencies to monitor changes in the health of the environment… soooo enter the community.

Photopoints are one of the simplest monitoring techniques for community environmental restoration projects. My growing database currently has around 300 groups on it restoring parts of the New Zealand landscape. Nothing shows change resulting from hands on work more clearly than a time lapse series of photos taken from the same place. For a lot of the projects, images might show weeds disappearing, then spindly plants (or PB3s in restoration-speak) neatly spaced next to stakes, then in a few short years (thanks to a largely benign climate), trees and shrubs coalescing into forest.

What’s great about http://monitorchange.org is that instead of relying on one or two volunteers to visit the site to document the photopoint, a much wider group of photo-takers can get involved. Using this method, anyone passing by with a camera (of any sort) can contribute to a database of images from a given site. Sure, you might need some fancy software to tweak photos to get the best results, but there’s a high likely value in whatever images are sent through – provided there are enough of them. Crowd-sourced photopoints… I like it.

Also harnessing the public in a slightly different way are various apps to monitor change, but hey, that’s the content of another blog someday.

2 responses to “So what is #CitizenScience?”